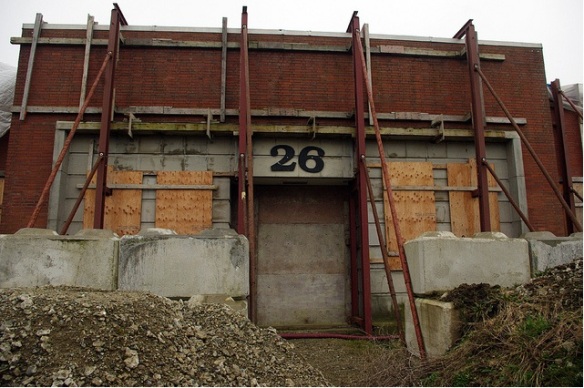 The Chrysler Building's brick wall is braced with metal poles while it undergoes restoration. Click for Flickr photo gallery

Every city is in some way adorned with a legacy of historic buildings, those fixtures of the past which provide a window into the character of previous days.

Vancouver is of course no different. Places like Casa Mia, a mansion built by bootleggers in the 1930s, offer more than just shelter from the storm. They give the city a story, one which can be shared with visitors and newborns alike.

While the rum-runner mansion, currently rumoured to be on the market for more than $10 million, offers an appealing story of high-class gangsters, all of Vancouver’s heritage buildings have a tale worth telling.

The Langara area is home to several heritage sites. They may not be as flashy as the others, but they each represent a worthy piece of Vancouver’s past.

The Chrysler Building on 26 W Marine Drive is one such example.

It was built in 1956, a direct product of the post-war boom. Canadians were spending more than ever, families were growing and the consumer age rolled full-steam ahead.

All that stands now is the front wall, protected by a top-rating on Vancouver’s heritage register. The site has been rezoned to allow for the building of a retail complex centred around a large Canadian Tire store.

Marco Bordignon points to the old wall's black support beam. The lead-filled beam will anchor the wall to the new building, he said.

Marco Bordignon is the project coordinator on the site.

“They’re using it like a showpiece,” Bordignon said of the intended design. The building’s remains will be fixed against the opening wall of the store, facing outwards towards Marine Drive. He said that a great deal of care is being taken to protect the wall while the new stores are constructed.

The new store was designed by architect John Cheung.

“Part of the agreement is to make sure we retain the wall, [but also] that we have to restore the wall,” Cheung said, speaking of his design for the retail giant. The wall suffers from damaged brickwork and needs supports to prevent it from collapsing while the new complex is constructed.

While the people who worked there didn’t have high status jobs or stories worth making a movie about, their legends are told just as much. The nuclear family and white-glowing television sets, when smoking was okay and letters had to be physically written.

While a brick wall might not be much to look at, the Langara area is also home to sites that are protected because of the shear beauty of their design.

One example is the Unitarian Church on W 49th Avenue.

Reverend Steve Epperson knows all about it.

“You’ve got wood, you’ve got lots of light. He wanted to build it so you’d have that sense of inside being outside, bringing nature in,” Epperson said.

The building was designed by Wolfgang Gerson in 1964 with a careful ear towards acoustics. While serving primarily as a church, the building doubles as a highly regarded concert hall.

Epperson stands beside a plaque dedicating the building to its creator

So much has the building been praised for the brilliance of its design that it has also been given a top-rating on the heritage register.

Windows into the past

The Langara area is also home to sites that are valued because of their age.

Sir William Van Horne Elementary will be celebrating its centennial this year during the month of May. Built in 1911, the school continues to educate the children who grow up in our neighbourhood. Even at the age of 100, the building is a well-maintained window into the areas past.

Close to that is the C.G. Johnson house on W 58th Avenue. Built in 1912 by one of Vancouver’s wealthier individuals, it later became a nursing home in 1938. Like the school it stands well-preserved, an age-old building amongst freshly dry-walled suburban houses and sprawling retail outlets.

Error: Twitter did not respond. Please wait a few minutes and refresh this page.